I had the good fortune to meet Geralyn at Central Canada Comic Con, also known as C4. She had with her a few copies of her yet to be officially released book. Now it’s out and I’d like to introduce you to it. 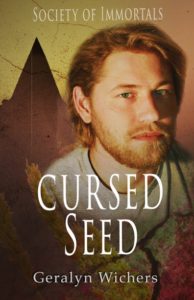 Jack doesn’t know how he resurrected after the gruesome construction accident that killed him. But while his loved ones age and pass away, he remains unchanged, indestructible. With his wife of thirty years dying of cancer, Jack is consumed by the desire to end his life.

A mysterious society of immortals holds the answers, but others would kill for that knowledge. An ancient feud over the power of life and death, an enigmatic murder, a paranoia-stricken history professor. Will these give Jack the keys to following his beloved into the grave? Or will someone else get him first? 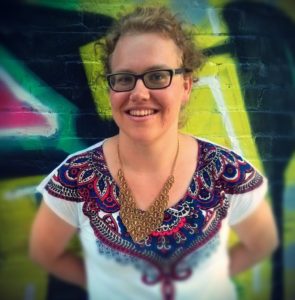 Geralyn Wichers is a writer who moonlights as a manufacturing operator at a large factory. When she’s not wearing a respirator and handling hazardous chemicals, Geralyn is either writing about the impending zombie apocalypse, or training to survive it by running long distances.

Geralyn is a marathoner, a foodie, and a coffee addict. She wrote We are the Living, an apocalyptic story of love and hope in the midst of destruction, and Sons of Earth, the story of a clone finding his humanity in a dystopian near-future. Geralyn just released urban fantasy novel Cursed Seed, the first of the Society of Immortals trilogy

Congratulations on publishing Cursed Seed. How do you feel about publishing this book? Does it feel different from the previous books you’ve put out?

Thanks! Yeah, this book does feel a little bit different then other’s I’ve published. I think that’s mostly because, as this is the first time I’ve gone through a publisher, this book has been much more of a group effort than the previous two.

This is my third published work. I published a love story called We are the Living, set in zombie-riddled, post-apocalyptic Italy. I didn’t set out to write a love story in that case. What began as an adventure story turned into a story about loving someone with mental illness, that just happened to have zombies, guerrilla warfare, and a miracle-healing priest in it.

Sons of Earth was my second novel. Dominic is a “manufactured person” or a clone. He was bred to be a fighting machine, but didn’t meet specifications. Knowing he’d be exterminated, he escaped the cloning facility. Years later, he comes back as a scientist, hoping to overthrow the company from within. This story was inspired by the manufacturing plant I work in… though I’d like to think it isn’t quite the blood-sucking monstrosity that Caspian Genetics is in the story.

Cursed Seed deals with mortality and immortality and our desire to choose our own lives. What motivated you to write the story?

For starters, I don’t write didactically. I don’t set out to preach a message with my work. I do, however, explore ideas when I write stories and so deep themes start popping unplanned. I think this is the true purpose of fiction, to give us scenarios to explore ideas and their applications.

If there is a “point” to Cursed Seed, I think it has less to do with mortality and immortality, and more to do with grieving, and finding the strength to move on despite the past. Jack, Alexander and Alannah are all grieving the loss of a loved one and it is coloring all of their decisions. I guess I can’t say too much about that without spoilers, though.

I have no idea! I like history, and biographies, and some dystopian novels, and some fantasy novels… but can I say any of them are my favourite? Nope. I guess my mind doesn’t work that way.

I love to write characters, and generally miserable ones. I really don’t know why.

Since we had the chance to meet at Comic Con, if you were going be a geek about a movie or series, what would it be?

Well, I’ve read the Harry Potter series 2 1/2 times in like 2 years. I guess that makes me a geek about them? I’m also a huge fan of the Chronicles of Narnia books.

Currently, I’m writing from my kitchen counter beside the dirty dishes. 🙂 I don’t have an office, so generally I’m lounging in my easy chair with my feet up. I also really like to take my laptop to a coffee shop. The noise is soothing.

I’m revising the sequel to Cursed Seed, tentatively titled Trial by Water. Practically anything I say about it will be spoilers, I guess. It picks up where the last book left off, and also adds a thread in pre WWI England, where Alexander and company investigate the mysterious death of an immortal and Zoran’s claims that his unborn child is guaranteed to be immortal also. Giovanni Ardovinni, a background character in Cursed Seed, is tempted to make a deal with Zoran to immortalize his lover, John Burke, and his choices begin to reverberate into the present day.

Yes. I believe I should.

Oh wait, was it supposed to be writing related?