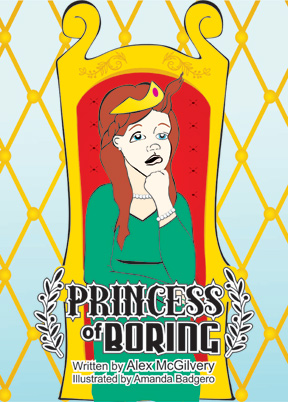 Princess Annuetta lay on the floor of her room–toys surrounded her piling up against the wall like a    great wave, covering the floor and hanging from the ceiling.

No one came to the door. The Princess heaved a deep sigh and pushed herself to her feet. She kicked a doll out of spite and picked her way to the door of her room and pulled it open.

The hall stretched in front of her, parquet floor gleaming in the light from the many windows.. She used to slide in her stocking feet on the floor. But one could only slide so many times before it ceased to be entertaining. The light from the windows that lined the hallways made dust motes dance.

She trudged down the long hall, not bothering to look out the windows. The view never changed.

At the stairs, she walked down the wide spiral. Her ancestors peered at her out of the paintings on the wall. They all had dull names and duller histories. Nothing interesting ever happened. They should rename this place the Boring Kingdom.

“I’m bored,” she shouted down into the huge hall. A door closing somewhere below was her only answer.

At the bottom of the stairs, she stomped across the marble floor and Persian rugs to a hall that led to another wing of the palace. Here were pictures of landscapes and beasts frozen in time by some painter’s brush. Not one dragon or unicorn or fantastical creature among them. At the very end of the hall were double doors with guards standing on either side.

“Have you ever killed anyone?” she asked the one on the right.

“Boring,” she said and pushed through the doors.

The room held a large table with seven chairs set around it. Her father’s advisors sat in them. Boring people who talked about taxes and farming and keeping peace with their neighbouring kingdoms.

“Father,” Princess Annuetta said, “I’m bored. There is nothing to do.”

“You have a whole room of toys,” her father, the King said.

“I’m nine,” she said and flopped down in the one empty chair at the end of the table. “Toys are for little kids.”

“It’s a nice day outside,” Sir Boris, the leader of the kingdom’s army said.

“There’s nothing to do outside,” she said. “Maybe we should go to war. That wouldn’t be boring.”

“There are worse things than being bored,” Sir Boris said. He picked up his cane and hobbled out of the room after bowing to the King.

“You could go for a ride,” Lady Francis said. She watched over all the farms in the kingdom.

“I’ve been for a ride before,” the princess said. “Horses stink.”

Lady Francis nodded at the King and followed Sir Boris out of the room. None of the others tried to suggest things to do. They simply bowed or nodded and left the room.

“I hate being bored,” the princess said. “None of the princesses in the stories are bored. They get to do exciting things like being kidnapped by a dragon, or enchanted by an evil witch.”

Her father frowned at her.

“Life is not all about keeping you entertained…”

The princess heaved a sigh and kicked the table. She’d heard this lecture before. Blah, blah, blah.

“Buy me a monkey,” she said, interrupting him. “A monkey wouldn’t be boring.”

“I’m not buying you a monkey,” her father said. “They are messy and you’d be tired of it in a week. The servants are busy enough without having to clean up after a monkey.”

“It’s not fair!” the princess climbed on the chair, then walked along the table where she could stare her father in the eye. “Why should I have to be bored just because I live in a boring palace in a boring kingdom with a boring…”

“Don’t finish that.” Her father’s face turned red. “I’m not buying you a monkey. Now go up to your room and find some way to entertain yourself.”

“But Daddy…” the princess said. She made her very best sad face. Her father waved his hand at one of the guards.

“Either you walk to your room, or you will be carried,” he said. “It is time you started acting like a princess.”

She stomped her foot on the table and knocked over a glass of water.

The guard scooped her up and carried her over his shoulder out of the room. Princess Annuetta kicked and screamed and pounded on his back, but all she did was hurt her hands.

“I’m still bored,” she yelled as the guard marched down the hall.