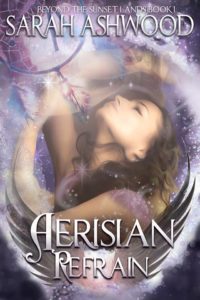 On Earth, Annie’s voice brought her fame and fortune. In Aerisia, her voice brings her magic, but the cost of that power might mean the destruction of Aerisia itself.

Following the prophesied Artan’s victory over the Dark Powers, the land of Aerisia is finally at rest, until ancient beings, long imprisoned, begin to stir…

Eight years after Annie Richards’ stellar voice and musical talents skyrocketed her from rural Oklahoma to international fame, haunting visions have begun threatening her sanity. While she’s returning to her childhood home to convalesce, creatures straight from her nightmares bring down her plane. Annie wakens in a parallel world, Aerisia. Here, she discovers her musical gifts translate into magical powers—the legacy of a banished race who have been invading her dreams.

Mistrusted by Aerisia’s most powerful factions because of her heritage, Annie finds allies are hard to come by. Supporting her are one Simathe warrior, Cole, who refuses to label her as evil, and one woman willing to stand against anything and anyone to help a friend: the Artan herself. Seizing control of her destiny will mean defying both her ancestors and the Aerisian leaders. Mastering her magic may mean making the greatest sacrifice of all…or risk becoming the reason Aerisia itself is torn apart.

Tell us more about your book.

Aerisian Refrain, my newest book, is the story of a young Native American woman, Annie Richards, whose voice and musical talents have skyrocketed her from a cattle ranch in rural Oklahoma into worldwide fame. However, haunting visions have begun accosting her, making her question her sanity. She’s returning to her childhood home to convalesce when creatures straight from her nightmares bring down her plane. She awakens in a parallel world, Aerisia, where she must not only stay alive, but figure out why she is there and how her musical abilities play into the mystery. Along the way she’ll encounter giants, fairies, immortal warriors, people of the moon, pirates, dragonkind, and more. In the end, she must choose her own destiny, or risk becoming the reason Aerisia itself is torn apart.

Well, I’m a homeschooling mom of three boys. I’m a runner—planning to do the Tulsa Run 15k this fall. I’ve done 15ks before, but not this particular one. I’m married to an asphalt plant operator and I literally never know from one day to the next when he’ll be home, because there are no set hours in a job like his. Especially this time of year, in the summer. I’m a writer, of course. So far my published works include a fantasy novella, Amana, my Sunset Lands Beyond trilogy, several short stories in various anthologies, and now my brand new Beyond the Sunset Lands series.

What inspired you to write your book?

A few things. I enjoyed the male MC, Cole, so much in my Sunset Lands Beyond trilogy where he was a side character that I wanted to tell his story. Also, in this new series, which is sort of a follow up series to my first Aerisia trilogy, I wanted to take a closer look at some of Aerisia’s unique races and their worlds. Aerisian Refrain delves heavily into the world of Aerisia’s fairies, their mysteries and their magic. Lastly, I wanted to explore a connection between music and magic, so I wove all of these elements into this book.

I love fairytales, historical fiction, anything based on Greek and Roman mythology, anything set in medieval Europe or ancient Rome, and—of course—fantasy in nearly all its genres. What I love about fantasy is that I can take elements from each of these and weave them into my stories.

Up until a few weeks ago I usually wrote sitting cross-legged on my bed with my laptop. However, recently a cousin gave me a beautiful antique wooden desk that was so small it fit perfectly into an unused corner in my bedroom. It’s just big enough to hold the essentials and I love it.

Besides releasing Aerisian Refrain, my next project will be a fun Young Adult Fantasy/Fairytale called Knight’s Rebirth, coming in time for Christmas 2018! It’s the story of a famous knight, Sir Buckhunter Dornley, who is content to live alone until he meets the charming and outrageous Princess Mercy. When he discovers Mercy lives under a deadly curse, how far will he go to break it?

So do you, as an author, ever talk to your characters and do they respond?

Me: I don’t know that I so much as talk to my characters as sit back and observe everything they say and think and do, and then try to guide them in the direction I want them to go. They’re, uh, often pretty resistant, though. 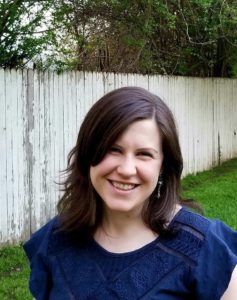 Don’t believe all the hype. Sarah Ashwood isn’t really a gladiator, a Highlander, a fencer, a skilled horsewoman, an archer, a magic wielder, or a martial arts expert. That’s only in her mind. In real life, she’s a genuine Okie from Muskogee who grew up in the wooded hills outside the oldest town in Oklahoma and holds a B.A. in English from American Military University. She now lives (mostly) quietly at home with her husband and three sons, where she tries to sneak in a daily run or workout to save her sanity and keep her mind fresh for her next story.

Sarah’s works include the Sunset Lands Beyond trilogy and the fantasy novella Amana. 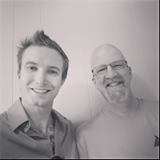 I connected with a fascinating guy, Colton, who does the Desert Tiger Podcast. We got together a Sunday morning and had a blast talking about writing, music and mental health. I had a bit of a cold, so there’s some coughing there too.

I can’t say if it will increase sales, and I’m not really worried about that, but I do know making connections is important. If you’ve always considered starting a podcast, listening to a few is a must. But I’d encourage you to reach out to people and ask to be on their podcast.

On the show, I talk about my newest book The Regent’s Reign and some other books, including some which will never be published.

You can listen here and for those who do, a reward. If you email me the title of my upcoming book for the summer,( It takes place in Spruce Bay and follows after Wendigo Whispers.) I will send you a free ebook of The Regent’s Reign in either mobi (kindle) or epub (everyone else.)