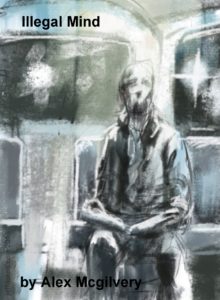 The third story in the Collidor series is Alex Mcgilvery’s Illegal Mind. Here is a preview of the story, with a link for access to the full story. Keep checking back as more content related to this story will be posted this week!

The cop stood in the bus with her gun pointed at Zechariah.

“Put your hands on your head,” she said.

Zechariah thought it was an overreaction to reading a Bible on the bus, but he carefully put the book on the seat behind him and put his hands on his head. He prayed that God would give the cop patience. The other passengers moved as far away from him as possible.

“You’ve got to be kidding,” Zechariah said, “the floor is disgusting.”

Instead of arguing, the cop pulled the trigger. It was the first time Zechariah had been tazed. The electricity ran through his body like painful ecstasy and he fell twitching to the rubber matting that coated the aisle of the bus. It smelled of rot and puke and old urine. Fresh urine now, as hot liquid escaped his bladder and puddled around him.

“Ewww,” the kid said. The same kid who had started all this.

Zechariah had boarded the bus as he always did and taken a seat near the back. Nobody paid much attention to what went on at the back, so it was safer. He pulled out his Bible and opened it to the chapter he was studying. He’d just started Romans and reading about the sin of people who’d abandoned God for the lusts of their flesh. He looked up briefly to see a kid reading a book called Still More Shades. The cover moved as the kid turned the pages and Zechariah felt hot blood in his face. That cover glorified the sins of the flesh.

He tried to return his attention to the Bible in front of him. He couldn’t afford to draw notice. Paul’s words on sin couldn’t compete with the graphic, jerky sexuality of the cover of the kid’s book. His eyes would be drawn to it and he’d have to pull them away again.

To read the rest of the story and see other stories in the series go to Smashwords. You can now buy the paperback on Amazon.