The Heronmaster and other stories is now live. 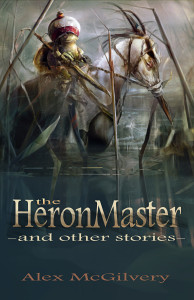 This is my second collection. Stories included are: the title story, the tale of Leaper who grows from a tadpole to become a legend, Murder in the Woods a noir style mystery with animals rather than people — Nick, a young wolf, is forced to seek out the answer to Bob the moose’s disappearance. Sammy a story of a young man on a cruise with his new car, the elderly man he takes with him and a red balloon, Madison’s Meteor tells the story of Frank Madison, a farmer outside of the town of Madison which has fallen on hard times with the closing of the plant – the main employer for the town. Frank finds a meteor one night and changes start in both him and the town.

Here is a sample from Murder in the Woods:

Bob wandered down to the marsh for a bite to eat. He followed the trail, not paying much attention to anything but the surface sounds of the forest. Trees creaked in the breeze. Birds flitted about stashing food for the coming winter or stuffing themselves in readiness for flying south. Nothing that mattered. His antlers broke off the few branches that stretched over the path far enough to tangle with them, adding to the noise.

Bob was at the top of his game. Other animals told him he was an ugly, short tempered creature, but since he was a moose, that was a fair description. The ladies liked him fine; and it wouldn’t be that long before he started bringing them in.

“Hey, Bob,” A squirrel ran out on a branch in front of him. “Where you heading?”

“I’m just heading to the swamp to grab a bite.”

“Something’s off today.” The squirrel ran back and forth on the branch.

“What?” Bob squinted at the squirrel.  “It’s safe enough. Listen, no one else is worried.”

“Get out of my face.” Bob swung his antlers and snapped the branch just after the squirrel jumped away. She swore at him as he ambled off. Had to admire her repertoire of curses, even if they were directed at him.

At the edge of the woods, Bob stopped, listened carefully and tested the wind. She might be a squirrel with a brain hardly bigger than the nuts she ate, but she was one of the forest’s early warning systems. It didn’t hurt to be a little extra careful; not that he’d ever tell her that.

The breeze didn’t carry anything but the stench of swamp. Geese flew overhead honking. Safe enough. Bob walked out into the clearing and squelched through the mud to the marsh. He was knee deep in the water when a duck paddled past.

“Mmmmph,” Bob said through the succulent plants in his mouth.

“Wish I could stay here all winter,” the duck said. “I don’t like the idea of flying through the war zone. I lost one of my best friends last year.”

“Tough,” Bob said, and left it to the duck to decide if he was being rude or sympathetic. The duck quacked and flew off. Bob guessed he had decided on rude. It just meant he could eat in peace before the sun came all the way up and made it too warm.

He gorged himself on the tender plants of the marsh. This was his favourite time of the year. He carried a full rack. He felt strong and sexy and soon the ladies would be coming and begging him for what only he could give them. It was also as safe as the forest ever got. Nobody wanted to mess with a bull moose.

The last thing he felt was cold and sharp on his throat.

Here’s a taste of the The Heronmaster:

Leaper hadn’t seen the flies this thick in all the weeks since he had gotten his legs. They thickened the air and his tongue darted everywhere. He planned to eat until he was as big as Old Bull who had swallowed Jumper whole yesterday.– demonstrating the importance of keeping a respectful, and safe, distance from the huge frog who ruled the pond with an iron tongue. One day it would be him sitting in that hollow stump.

“Bird!” came the call from across the pond. Leaper splashed into the warm water and peered up. A shadow passed over but didn’t feel the shudder of water which meant it had landed. After a brief time Leaper climbed back up onto the lily pad and went back to the catching of flies.

The afternoon passed quickly; Leaper stuffed himself with so many flies he could barely move. Under the water he soaked in warmth and oxygen in his favorite spot under a huge pad. Close enough to hear Old Bull, but far enough away to be safe from the big frog’s appetite.

“Gather in,” Old Bull said. “Come in close. We will sing, we will speak, we will eat.” His tongue flashed out and a little frog jumped further away. Old Bull laughed and swallowed a mosquito.

The night buzzed with mosquitoes and song. Though Leaper was too young to sing the mating, he listened and wondered at the urgency of its call. It thrummed through him with a promise he felt more than understood. The old frog was talking again.

“The heron is as tall as the rushes and a lethal beak,” Old Bull said, “still as death, yet deadly quick. Your only hope is to hide deep in the mud. The slightest twitch will give you away.”

“Have you ever seen it?” a small frog asked.

“Come close, come close and I’ll tell you how I escaped its beak.”

The frog hopped a little forward and Leaper closed his eyes. He knew how this would end. Sure enough a final croak followed by Old Bull’s deep chuckle came across the water..

“Be wise, young frogs. Be cautious. Eat but don’t be eaten.” Old Bull chuckled again, and said, “Unless it’s me that’s doing the eating. ”

Leaper hatched from his egg knowing he’d be a meal for anything bigger than him. Anything smaller became a meal. Still, he sank under his pad and into the mud. It could have been him. It wasn’t part of his plan to be a snack for another frog.

Days in the pond were all pretty much the same. Leaper lay in wait for the flies and avoided the many creatures lying in wait for him. He learned ducks weren’t interested in eating frogs, but some fish were. Strange how existence could be always a matter of life and death yet also stupefyingly boring.

From the moment he left the egg he was being chased by everything in the pond larger than him  His world was the patch of green slime on the edge of the water. Most of his egg mates vanished; eaten by fish, birds, even insects.

Leaper’s first leg had been a matter of great astonishment. It didn’t appear to be good for much. Flailing it about only sent him in circles. The arrival of the other leg let him swim in a straight line again. By the time he grew the front legs, his tail shrank. There was a great deal more to life than green slime. The first time he hopped out of the water and breathed air, he narrowly avoided a swoop by a kingfisher.