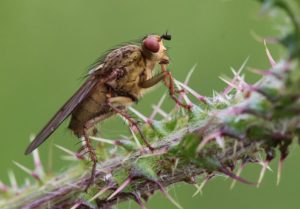 John vacuumed the flies from the windowsills. Janet called them cluster flies. John didn’t care what they were. Their incessant buzzing was driving him crazy and they ruined the view. If they were going to sell the house, he didn’t want myriad black flies blocking the view. They bought the house because of the view. It was in the fall. He and Janet fell in love with the flaming colours of the trees in the ravine.

That was back when they were the perfect loving couple. They met in night school. John was taking accounting, Janet studied dance. The magnitude of their differences just added to their love. They would talk for hours, and when they ran out of words, just sit and stare into each other’s eyes.

“The eyes are the windows of the soul.” She would say as she rapped on his head. “Anyone home?”

“Accounting is my job.” He would say. “But you are my life.”

They got married and bought the house. Janet made it a home while he worked to pay for it; to make it theirs.

John sucked the last of the flies from the window and dragged the still buzzing vacuum to the next one. No matter how many times he did this. They came back the next day. From this window, he could catch a glimpse of the river. In the winter it was even better. The stark black trunks of the willows were like the tangle truths of their life. They stood between John and the river, and made the view more interesting.

Their life in the house became complicated, but John relished the challenge. He would come home from work and find Janet dancing naked through the rooms. She would laugh and pull him into the dance. They would shed his clothes throughout the house until he was as naked as the willows by the river. Then they would fall laughing in whatever room they were in and make love.

“The eyes are the windows of the soul.” Janet would say.

John moved to yet another window the vacuum roaring its death sentence for the flies tapping against the glass. They tried to flee, but John caught them all. There was no escape. Spring came, and the flies came too. They appeared in the windows as if by spontaneous generation. The leaves burst bright green down by the river. The water became a secret guarded by the fecundity of the trees.

Janet became pregnant. It was a difficult pregnancy and Janet became fractious. John tried to come home early. The constant irritation of the flies made her cranky. John tried all kinds of remedies; anything except poison. He finally settled on this daily trek past each of the windows that faced the river. The flies not only filled the windows of the house, but seemed to fill up the window of their souls. Their love was being strangled.

“Anyone home?” He would say, but Janet’s eyes were filled with anxieties like flies that he could not vacuum away. Her soul was hidden.

The last window was the hardest. The flies rattled into the vacuum. It had been Janet’s favourite. Summer had seared the greenery. Life in the ravine was dry and dusty. Even the water had retreated from the heat. The flowers and Janet wilted.

She lost the baby the day after there were no more flies. John came home to find her keening in the upstairs room. They went to the hospital, but there was nothing to be done. John tried, but he couldn’t see in through Janet’s eyes. They were closed to him, and he was lost.

“Go away.” She would whisper. “There is nothing to say.”

Fall was brown and dull. Winter was gray and wet. John left the curtains closed. He started coming home later. She never danced. They never laughed. Then the flies came back and Janet found that she hated the house.

“We can sell the house.” He had said. “Start over somewhere else.”

John switched off the vacuum, and looked out the window at the tangled weeds, and he began to weep. The harder he tried to stop the louder it came. All his grief, all his pain, all his love came out in a siren wail. Janet came and knelt beside him. They held each other and wept, and the tears washed the flies from their eyes.

“Our eyes are the windows to our soul.” John said looking into her eyes.

“I am glad you are home.” She said kissing his salty lips.