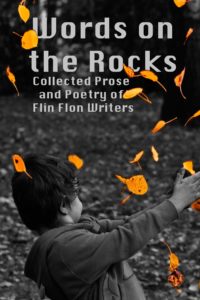 The Flin Flon Writers Guild sponsored a collection of local talent. The ages of writers run from 8 to 80. The cover and interior pictures feature local artists and photographers.  It is available in paperback from Lulu, and in ebook from Amazon. You don’t have to be from Flin Flon to enjoy this collection.

Here’s a taste of my contribution to the book:

Moash MacThane came to the tiny river that was the southern boundary of his holding. He tied the lead rope to a nearby tree and began stripping off the battered armour that had served him so well in the months he had been gone. As each piece was removed, he turned it over in his hands then placed it into a rough sack.

When he stood as naked as the day he was born, the tall muscular man walked out into the river and lay down in the icy water. Lying on the smooth rocks he remembered the face of each person he had killed in the struggle to put the rightful King on the throne. The water flowed past him and carried the memories away as it gradually cleansed his soul. When the last face had faded from the inside of his eyelids, Moash sat up and gulped in a huge breath of night air. He splashed to the shore and put on some homespun clothes that had travelled in the bottom of his pack all this time. He tied the sack of armour and his claymore to the saddle of his horse then picked up the lead rope of the cow that munched mindlessly on the grass by the tree. The returning hero led the beast across the river and up the hill…