I like to highlight other authors now and again. Conviction is Lauren’s second book, a follow up on Courage, a sci-fi reimagining of the story of the birth of Moses. Lauren suggests reading the books in order if possible. They are both available through Amazon, and Kindle Unlimited. 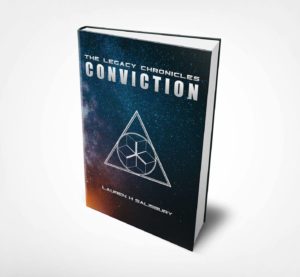 Can two people with opposing principles overcome their differences to be together?

Than has spent his life ostensibly having fun while secretly fighting for his people’s freedom. A member of the underground resistance, he is only ever serious around his comrades and his family. When an injury forces him to step down from active duty and his reluctant nurse sparks his interest, Than finds himself in uncharted territory. The fascinating woman will have nothing to do with him.

Menali’s past has taught her to keep her head down and trust that God has a reason for allowing the human race to suffer on U’du. When Than explodes into her life, he refuses to take no for an answer and challenges all of her preconceptions. He soon has her re-evaluating her priorities and wondering what life with someone like him would be like.

Lauren H Salisbury was an English teacher for sixteen years with an MA in Education. She is now a writer who dabbles with tutoring and lives with her husband and a room full of books in Yorkshire, England. She likes to spend winters abroad, following the sunshine and becoming the seasonal envy of her friends. When she’s not writing, she can be found spending time with family, reading, walking, crafting, or cooking. Courage is her debut novel.

Tell us more about your book.

Conviction is the story of two people who have opposite views on everything but find themselves drawn to the other. They each face challenges in their personal lives and lean on their growing friendship to help them deal with those issues. It’s about learning to look beyond the surface to really get to know someone, and to let go of expectations and opinions when they prove false. It also has a resistance movement bent on freeing the human slaves from their ruthless alien overlords, with a little help from an unexpected source.

Conviction is the second book in my debut series, The Legacy Chronicles. Courage was released in February of this year, and the third book, Strength, should be ready by March next year. I started writing seriously after sixteen years as an English teacher, but I’ve always loved to create stories. Publishing this series has been a dream.

What inspired you to write your book?

Conviction is the second book in my Legacy Chronicles series. The series is based on the women in Moses’s life with each book telling one of their stories in a science fiction setting. I’ve always admired these Biblical characters for their faith and courage, and I’ve loved writing about them.

Conviction wasn’t supposed to exist. My mum alpha read the first book, Courage, and kept asking about Than and Menali. As a thank you for all her hard work, I wrote their story for her. It was supposed to be a novella, but it kept growing as I dug deeper into the two characters and found there was a lot more story to tell. Than does have a way of pushing into the centre of things, but Menali surprised me. You’ll have to read it to find out any more.

What are your favourite kinds of stories to read and write?

I like to read all types of stories, from science fiction and fantasy to historical fiction to murder mysteries. There are only a few genres I refuse to read. My absolute favourites are stories where there’s a unique set up or a novel twist on what’s been done before. I also love complex characters that have many layers I can peel back as I get to know them.

My office space is extremely organized. I can’t work there when it’s messy. That said, I tend to do most of my writing either outside or sitting on the sofa in the living room, and I usually have at least two notebooks to hand along with a drink, my phone, a snack, and some tissues. It’s not exactly cluttered, but it’s nowhere near as pristine as my actual desk.

I’m about to start editing the third book in The Legacy Chronicles, Strength. I’m also halfway through writing the fourth and have another series circling my brain. Outside of writing, I’m renovating my house again.

Most of the questions I’d ask myself are along the lines of when I’m going to get on with some of the jobs I have to do around the house or on the next manuscript. The one that stands out as different is, “What’s the next film you want to watch at the cinema?”

The answer: Normally, I’d be saying the latest Marvel or sci-fi film, but right now I’m looking forward to the new remake of Little Women. I have such great memories of reading that book, so I’m interested in seeing how they update it.

One thought on “New Book by Lauren H Salisbury: Conviction”