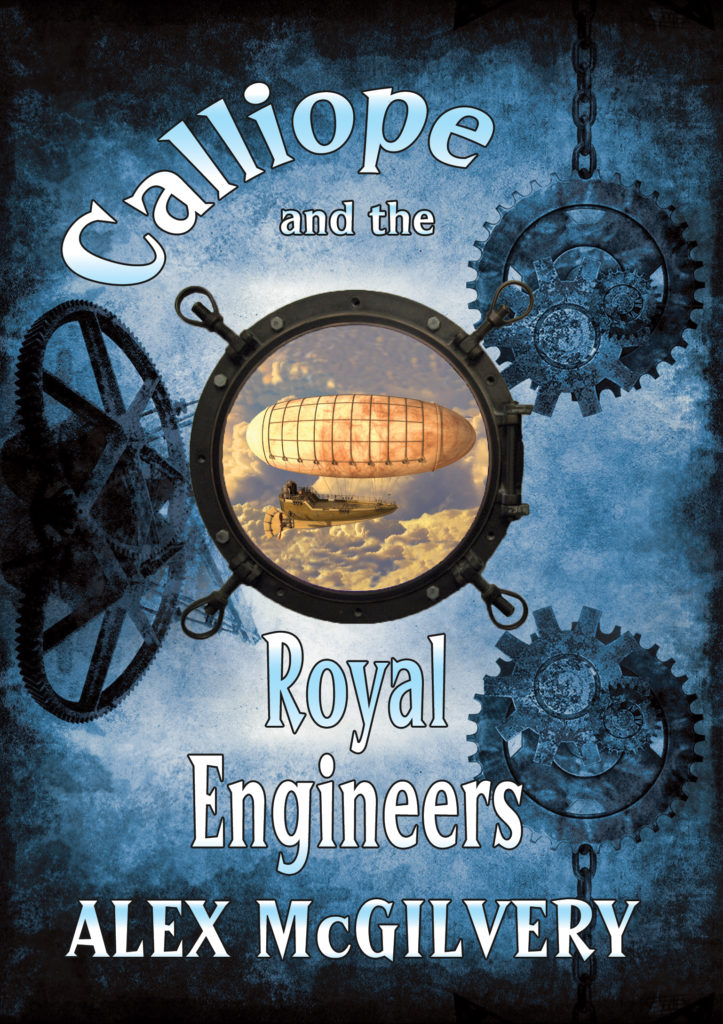 Cal is commanding the Kestrel. She suspects not all is right with the scientists who hired her ship. When trouble strikes she makes an enemy. Back in Anglia, she takes on the work of building an airship for the the crown prince. She’d dreamed of a quiet studio where she could draw. Instead she’s made Commander of the Royal Engineers and reports directly to the Admiralty. Engineering is dangerous work, add in treachery and even Cal may be hard pressed to succeed. But she’s never been one to quit.

Chapter 1 – The Gates of Hell

Green water washed over the window on the bridge of the Kestrel. Only the straps fastened to the harness Cal wore kept her on her feet and at the helm. The water receded as the steamship chugged up the next huge wave. At the pinnacle of the watery mountain, Cal caught a glimpse of waves crashing and tangling as far as she could see.

“Hold on,” Cal spoke to the sailor strapped into position. She could barely hear herself over the roar of wind and water as she looked to the right. “We’ll be hitting the starboard beam.”

“Hold on, starboard beam!” Thomas yelled down the ladder. Others would repeat the call to cover the length of the ship.

Cal adjusted the direction of their travel a few degrees to port to aim at a relatively calm stretch ahead. The Kestrel slid down the wave and crashed into the next not quite straight on. She swore the old girl cursed her as it lurched portside. Thomas grunted behind her.

“Tighten your straps. You go down the ladder no one will be able to help you.”

The Kestrel crested the next monster and as Cal had hoped they faced a league or two of smaller waves.

“By the numbers, Sailor. The crew can change watch. Double check the dogs on the hatches.”

Cal guided the Kestrel to keep sharp movements to a minimum. The crew knew their work, she needed to give them time to trade over, maybe snatch a hard bread from the galley.

The Gates of Hell lived up to their name. Most ships travelled the extra 200 miles to go around, but the damn fool passengers wanted to experience the Gates. Lord Sifton insisted it was a once in a lifetime opportunity. Life-ending was more like it, but he offered a handsome bonus and the crew agreed to take the risk.

One in five ships never made it out of the Gates. There would be no search; their names would be entered as lost at sea and become another reason ships should avoid the place.

“Aye, Captain.” Bundo had taken Thomas’ place at the ladder. He passed the word down the passageway.

“One minute. All hands, hold fast.” Cal deliberately relaxed against the straps. The wave coming was a monster.

“Man on deck!” The shout came from the second position. “Hatch open!”

“Ropes, two men holding, one crawls. You have thirty seconds, then get back inside with or without the idiot.”

Movement outside caught Cal’s attention. Lord Sifton dragged himself along the rail, hand over hand toward the bow. The passengers were supposed to be in their berths, strapped down.

The steamship slammed into the trough between the waves, water washed over the bow, turning the window in front of her almost black. She’d just lost three men to the Gates. Lines and curves jumped into her head showing the path of ship and men in the water. Her hands moved on their own, spinning the wheel hard to port.

“Hold fast!” Cal screamed. Committed now, she would either do the impossible or take the Kestrel to the bottom of the ocean. Instead of climbing the steep slope, the Kestrel turned broadside and heeled so far over the port rail disappeared beneath the water.

“Hold on, hold on.” Cal braced herself to stay at the helm while the deck became all but vertical. Screams floated up from the passageway as water crashed through it

“All safe!” The shout was barely audible over the splashing.

She spun the wheel to port and slowly the Kestrel righted herself and rode the wave. With the following swell, the risk of foundering was high.

“We aren’t done. Hang on.” She hit the bells to tell the engine room to open her full out.

The ship started up the slope in front of her, not as steep as the leading slope. Three-quarters of the way up the wave, Cal spun to starboard. The ship creaked as it passed broadside to the swell, leaning to the right this time. Then they hit the trough just as she came straight to the wave. This time Cal had no chance to plan her route, they’d lost headway and she pushed against the helm as if she could help her ship up the precipice.

The engine thrummed as the bow rose, and Cal’s harness cut into her back. She held the wheel with white knuckles. They reached the crest and the bow slammed down; when they hit the bottom of the trough, the water over the window cut off all light.

“God, help us…” Cal whispered from where she hung in her straps, hands locked on the helm. The Kestrel bobbed to the surface and the light returned.

“Strap in, no one move from their station!” Cal returned her focus to guiding the Kestrel through the turbulent waters of the Gates.

To order a print copy from your local bookstore use this