“Say something, blast you!” Jack yelled at the mannequin. He knew he was losing it, but why should he always be the one to carry the conversation? “You cheap bit of plastic. We’re through.” He pushed her over onto the pile of clothes and walked away.

It hadn’t taken long after the apocalypse had been inconsiderate enough to leave him behind for him to start losing what used to be referred to as sanity. Now that he was the only one left the whole question of what was and wasn’t sane was up for grabs. Jack peeked back at the mannequin but she had her hand up in what clearly meant to be a rude gesture. Let her stew for a while.

Yap trotted after him growling at his ankles. In all the movies he’d watched the lone survivors were accompanied by loyal and intelligent dogs, big ones. Yap was an irascible little mutt who would have a hard time protecting him from a squirrel. The dog stopped and lifted his leg.

“Yap,” Jack said, “how many times have I told you. Don’t pee on the canned goods?” He walked over to the telephone. “Clean up on aisle four. Clean up on aisle four.” He waited but nobody came, so he went to the back of the store for the mop and bucket. He put on the blue vest and mopped up the puddle. Then he carefully hung up the vest and went back to his shopping.

“We don’t have much of a choice today, boy.” Jack pulled his can opener from its leash and opened a couple of tins. He put one on the floor for the dog and spooned the cold beans into his mouth. He hated beans, especially cold, but he hated moving even more. But the shelves were dangerously empty.

“Well, Yap,” he said, “It’s time we found another place to hang out.” The dog barked then trotted over to a shelf and lifted his leg. “OK, OK, I’ll pack the cart.”

Jack put the last of the tins of food in the shopping cart along with a tent and sleeping bag from camping supplies. The final item was the shotgun and box of shells. There were predators out there. This was going to be a big move. He’d cleaned out all the stores in this town. The next town was at least a week’s walk to the south. There would be stores there with shelves full of food. His mouth watered at the thought of eating something other than beans.

They started out in the early morning. Yap trotting along attached to a leash tied to the cart. The dog hated the leash, but it was safer to keep him close. Jack pushed the cart along the road and basked in the warmth of the sun. He let Yap ride in the cart when he got tired.

“Leave the leash alone,” Jack said tapping the dog on the nose. “I don’t want you chewing at it.”

They made good time and he found himself enjoying the walk. Other than the faint squeak of the wheels the only sounds he could hear were the birds and the squirrels.

Then Yap took off after a squirrel that crossed right in front of him and the leash broke.

“Come here you stupid dog! That squirrel will eat you alive.” The dog ignored him and ran around the base of the tree barking. Jack didn’t see the eagle until it swooped down and snatched Yap from the ground. Picking up the shotgun he shot at the eagle but it was long gone.

Jack wiped at the tears that poured down his face. Here he was Jack, Survivor of the Apocalypse, crying over a stupid little dog. He looked at the shotgun in his hand. Maybe it was time to just end it. He was no heroic survivor; he was just a freak. There was no reason he could think of why he was left behind.

He put the gun back in the cart.

“Sorry, Yap, but I’m just not ready to let go.” He untied the end of the leash from the cart; dropped it to the asphalt then started pushing the cart down the road. 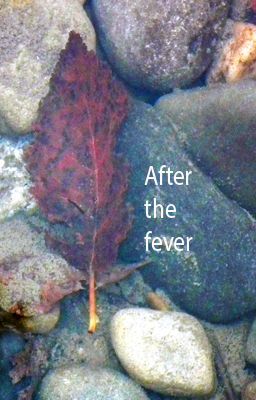 This story came out of a challenge to write about the upside of a really bad thing.

John ‘Wolfie” Mulholland scrambled away from the latest wave of zombies. They grabbed and pulled at him with their splintered fingers. Mrs. Dougherty was in the front row. She used to give him milk and cookies and listen while he ranted about the latest atrocity from school. Now she was trying to tear him apart. He kicked her knee and she fell to the ground. He felt sorry for her, but not sorry enough to die at her hands.

It just wasn’t fair! John’s rage brought him to his feet and he pushed the shambling neighbours away and made a break for freedom. His flight brought him to the edge of an escarpment where the fence had been crushed by a fallen tree. John ran up the trunk and leapt out into space. The escarpment was a two hundred foot bank of dirt and rock looming over the Humber River. It was possible to ride the loose dirt safely to the bottom. John had done it last year on a dare. His feet struck dirt and started a small landslide. He skipped and jumped to avoid the outcroppings of solid rock and splashed alive into the river. Then the first zombie landed beside him, head first, then it rained zombies. John dove under the water and swam out into the current and let it carry him away.

Still warm enough that John felt no immediate need to get out of the water; he let the river carry him away from the horrible life he already missed. Swine flu induced encephalitis was what the authorities called it – zombie flu. It disinhibited the infected by destroying their upper brain function. There were no survivors, except John who, apparently, was immune.

He finally climbed out of the water and stripped off his wet clothes. His foster parents would have beat him for it. He didn’t care anymore. John used his hands to strip the water out of the fur that covered his body, relieved to be rid of clothes that didn’t fit quite right.

The streetlights were coming on in patches so he started looking for safe shelter for the night. That’s when he heard the screams.

His feet reacted before his brain could carrying him around a corner to where a mob of zombies had cornered a young boy. John yelled in rage and slammed into the group pushing them off the youngster. Zombies growled and mumbled, but they didn’t scream. The kid was also immune.

Some of the crowd turned on John and he found himself fighting for his life. John kicked knees, punched throats and whatever else he could manage. But it wasn’t going to be enough, there were too many of them.

Then a shotgun roared and the mob twitched as pellets tore through it. Again and again the gun blasted until the zombies ran off leaving John gasping on the pavement. The kid put the gun down and came over to him.

“I didn’t think there was anyone else alive,” John thought his voice sounded odd through the ringing in his ears. “Thanks for the help,” he said, “I thought I was a goner.”

“I left the gun in my bag. They caught me by surprise and I didn’t have time to get it.” The gun was slung over the kid’s shoulder. “I won’t make that mistake again, but we need to get somewhere safe.

John faded in and out until the kid dragged him into a house.

John heard a shower running. “Good, there’s still hot water, but it won’t last long. We’d better share.” John stood under the hot water. He closed his eyes as it washed away both gore and despair.

Gentle hands scrubbed his back with soap. John sighed and leaned against the wall.

John squeezed to the side and opened his eyes to see his companion. The first thing he saw was that his rescuer was no boy. She was at least his age. The second thing was the soft red fur that covered her whole body. She put soap in his hand.

John carefully washed all the blood out of that miraculous fur.

“Hmmm,” she said running her finger through his wet brown fur. “Suits you.”

She stepped out of the shower and dried off. Wolfie followed her. She walked past the clothes in the hall and curled up on the sofa. John lounged in a chair across from her.

“It’s called Robson’s Syndrome. It’s rare, only a handful of cases in North America.” She stroked her side. “It causes the fur, and for some reason immunity to the zombie flu.

“We wait a few weeks for the fever to pass, then we go and look for survivors. It will take a while but we’ll rebuild. We might even learn something.”

“And what are we supposed to do while we wait?”

She smiled and stuck her tongue out at him. “I am sure we’ll be able to think of something.”

Well,  once you get past the whole end of the world thing, this was turning out to be a pretty good day.