Marilyn is studying to be a social worker, and working with the mandatory counsellor for the next step in her journey. Her father’s heart-attack at home changes all her plans. Her last hope to achieve her dreams may be a singing contest, but the price of winning may be more than she’s willing to pay. 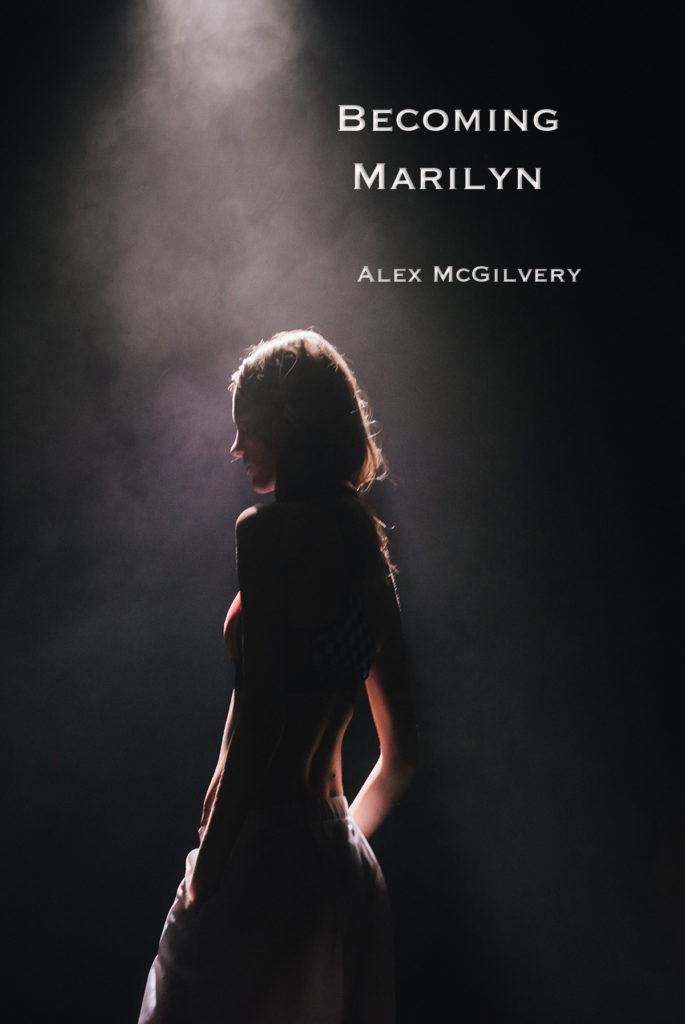 “It all started with Ophelia. Robert died when I put on that dress and looked in the mirror and saw Marilyn for the first time. Well, maybe I knew something before her, but she brought it to the surface.”

Marilyn looked at Dr. Tripp, but he just looked back at her with those damned blue eyes seeing past all the lies and excuses. Not that Dr. Tripp did anything as crass as challenge her. He expected her to do it for herself.

“Grade six,” Marilyn said, “Mr. Telfer taught us bits and pieces of English literature. He decided we should act out a scene from a play in Shakespeare. We chose groups of four. My group consisted of Mack, Joe and Tom, plus me. We were Smells like Rock and Roll. I played drums. We probably sucked, but we had fun.”

Dr. Tripp nodded. Marilyn took a deep breath. She could do this. She’d lived through it; it shouldn’t be hard to tell the story.

“We met in the clubhouse after school. We’d built it in the wood lot from scavenged lumber. Mack had the scripts Mr. Telfer handed out.

‘I’ll be Hamlet,’ Mack bossed everything. He played lead guitar and I remember him as being amazing, perhaps he was. ‘Joe you be Claudius and Tom can be Polonius. Robert, you’re Ophelia, because you’ve got the hair for it.’

I had long hair because all the drummers I watched did. My dad rolled his eyes, but let me grow it out. The others had buzz cuts, but I never heard any of them complain they wanted any different.

I looked at the script and saw Ophelia was a girl. I wanted to argue, but you didn’t argue with Mack. The other guys were snickering at me, but Mack asked which of them wanted Ophelia and they shut up. We were twelve, and girls were a different species. We might watch them, even admire them, but we weren’t going to hang out with them. That’s why we met in a crooked little shack in the woods, because the girls wouldn’t go there.

‘Learn your parts,’ Mack said when it got time to go home for supper.

Next day we met again. We hung out there every day, the only thing different was we practiced Hamlet instead of music. Yeah, we rehearsed out there. I had a drum set cobbled together from garbage cans and I used stakes from our croquet game as drumsticks. Mack had a real guitar. Joe played this tiny piano. It sounded terrible, but he acted like he was a maestro on it. Tom filled in on whatever Mack told him to use. We must have sounded awful, but out in those woods no one cared. Mack would look at me and say Just keep the beat.”

Marilyn swallowed and took a sip from her water bottle.

“It was the scene with to be or not to be and Mack had memorized the whole thing. He stomped around the clubhouse putting us in place.

‘I told you to learn your parts.” None of the rest of us had bothered. We read through the scene. Mack made us go back and read with feeling. He did the same with the music. We just did what he told us, that was always easier.

‘We have a week to get it together,’ Mack said, ‘Learn your parts.’

‘Do you want to be prancing about on the stage with this,’ Mack flicked the script. ‘in your hand? You’ll look a moron and make us look bad.’

Tom shrugged and peered at the script like he was studying it furiously and we laughed.

‘Robert,” Mack pointed at me, “try to sound like a girl.”

‘Talk high and breathy,’ Joe said, ‘like my sister.’

I went home and listened to my Dad and Brent, my older brother, talk. They were full of opinions. Neither of them left any space for other people’s ideas. They were like Mack, who talked and just assumed you’d agree with him. I tried to listen to Mom, but she didn’t say much. I helped her with the dishes.

‘I’m in this play thing at school,” I said as I dried the plates. ‘I have to play the part of Ophelia. She’s a girl in Hamlet. Mack told me I had to talk like a girl.’

‘Playing a girl might be hard,’ Mom handed me another plate.

Links to buy the ebook here