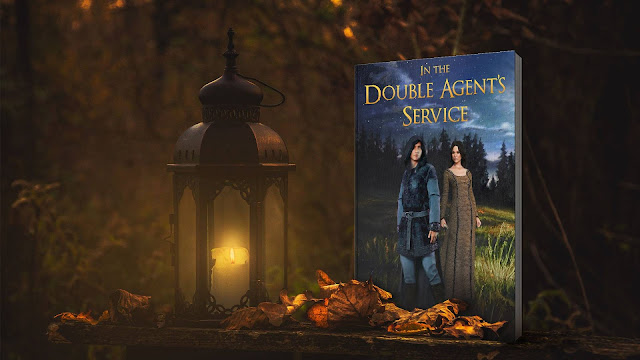 
Erik would give his life to protect King Jaymin. However, when an old enemy shows up with new schemes, that may not be enough.
Anya longs to be noticed by the king’s handsome bodyguard. But as she finally gains Erik’s attention, the notorious spy and double agent Dannel blackmails her into fulfilling a favor she has owed him for years. Anya is forced into a terrible choice: save Erik’s life, or protect her homeland.
Can Erik and Anya thwart an assassin and prevent a war before Dannel destroys everything that matters to them and to the kingdom?
In the Double Agent’s Service is the final book in the Annals of Alasia. Here’s a glimpse of the rest of the series! 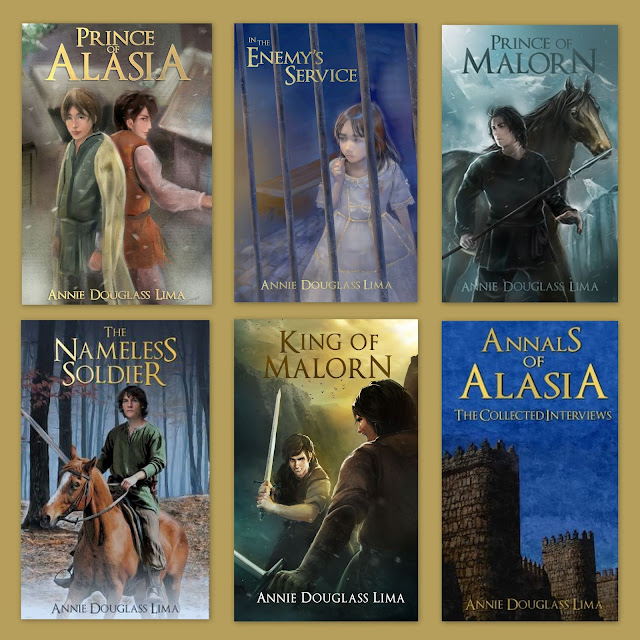 Prince of Alasia (just 99 cents through June 14th!)
An orphaned prince and his young bodyguard must disguise themselves and go into hiding after the kingdom of Alasia is overrun by invaders.  Can Prince Jaymin save his kingdom – and himself?
In the Enemy’s Service (just 99 cents through June 14th!)
Enslaved by invaders, Anya spies on the enemy to help her captive people – but when her own father is implicated in the betrayal that led to the Invasion, can she save him?
Prince of Malorn (FREE through June 11th!)
Can Prince Korram recruit an army from among the elusive Mountain Folk and claim his rightful throne before power-hungry Regent Rampus crushes them all?

The Nameless Soldier (just 99 cents through June 14th!)
The lone survivor of a brutal attack, can teen warrior Tarvic reclaim his honor and find a way to fight for his crippled kingdom under enemy occupation?
King of Malorn (just 99 cents through June 14th!)
Pursued by assassins, can Princess Kalendria help her brother reclaim his throne and prevent a war – and catch the handsome neighboring king’s attention while she’s at it?
Annals of Alasia: The Collected Interviews (available for FREE here!)
An orphaned prince. A devious double agent. A well-meaning merchant who may have just doomed his kingdom. Meet the citizens of Alasia and Malorn and prepare to be drawn into a tangled web of war and intrigue.
With the first six books ALL free or discounted, this is the perfect time to grab the whole series! Click here to see the Annals of Alasia series on Amazon.
Meanwhile, here is the first scene from In the Double Agent’s Service!
Pain.
Cold.
The smell of dry dirt.
A hard, gritty surface beneath his cheek.
Erik mentally catalogued the sensations in order of their intensity. He opened his eyes, blinked, and added another to the list.
Darkness.
Where am I? He struggled to sit up, and his pulse spiked at the realization that he couldn’t use his hands or feet. His ankles were bound together, and his wrists were tied behind his back.
What’s going on? Erik forced himself to a sitting position, noting the dirt floor beneath him, a rough wall at his back. Brushing his fingers over what he could reach of it, he discovered that the wall seemed to be made of the same hard-packed earth as the floor.
Am I underground? Though not completely smooth, the surfaces were too flat to be natural. Not a cave, then, but perhaps a cellar of some sort.
Or a cell.
He held his breath, straining his ears for any sound in the darkness. “Hello?” he whispered.
There was no response.
“Hello?” he said, a little louder. The acoustics hinted that he was in a small room. His head, already sore, throbbed anew at the sound of his own voice.
Erik leaned against the wall behind him, trying to keep calm. What happened? And where’s Jaymin?
Jaymin. Erik’s pulse started racing again. Had something happened to Jaymin?
Calm down, he ordered himself. He couldn’t afford to give in to panic. Instead, he would investigate his surroundings. Perhaps Jaymin was lying unconscious nearby.
Erik struggled to his feet and promptly smacked his head on a low ceiling. Dropping to his knees with a grunt of pain, he drew in a deep breath while a wave of dizziness rolled over him. When it passed, he shifted to a sitting position, bound legs in front of him. Moving slowly because every movement set his head throbbing, he began to crawl crab-like on his backside, feet, and hands. Keeping one shoulder against the wall, he scooted forward.
It didn’t take long to discover he was in a circular room, the walls curving back around toward where he had started. After eight steps, if he could call them that, his toes bumped something hard. Feeling with his feet, he discovered a stair in front of him, perhaps eight inches high. Shifting his weight, he leaned forward and took a little crouching jump into it. Another stair lay above it, and another. When he jumped onto the third stair, he winced as his injured head bumped the ceiling again.
Craning his neck and brushing an uninjured part of his forehead lightly back and forth against it, Erik discovered that the ceiling was made of wooden boards. Ducking lower with every hop so as not to bump it again, he made his way up the rest of the stairs until they ended at the wall. Twisting around, he hunched over awkwardly and ran his elbow back and forth across the low ceiling. As he had expected, a rectangular trapdoor lay just above him. He could feel the seams where its edges didn’t quite meet the surrounding boards. The hinges must be on the other side, but he thought he could detect a keyhole at one end. Nothing happened when he pushed up against the door with one shoulder, not that he had expected it to open for him.
Descending the steps again, Erik felt his way around the rest of the room. Eleven shuffling steps took him all the way around its circumference and back to the stairs. Criss-crossing the middle several times, he discovered it was completely empty.
If Jaymin wasn’t in here, where was he? Erik sat down and leaned against the wall, his head pounding from the exertion. Bending to brush it gently against his raised knees, he could feel a lump on his right temple. In addition, his upper lip was swollen and tasted like blood. It felt as though he had some bruises on his arms and torso, as well.
Erik closed his eyes — not that it made any difference in the complete darkness that surrounded him — and strained to recall what had happened. Had he and Jaymin been on a trip? He thought he remembered something about embarking on a journey. Where were they going? Was there an ambush? What happened to the palace guards who always accompanied the royal carriage?
Surely Jaymin couldn’t be dead. No one would kill the king but take his bodyguard captive. Would they?
And why would anyone take a bodyguard captive in the first place?

Click here to grab your copy of In the Double Agent’s Service.
Click here to see the Annals of Alasia series on Amazon.
About the Author 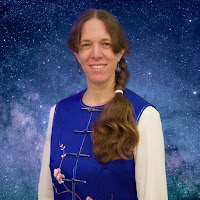 Annie Douglass Lima considers herself fortunate to have traveled in twenty different countries and lived in four of them. A fifth-grade teacher in her “other” life, she loves reading to her students and sparking their imaginations. Her books include science fiction, fantasy, YA action and adventure novels, a puppet script, anthologies of her students’ poetry, Bible verse coloring and activity books, and a fantasy-themed cookbook. When she isn’t teaching or writing, Annie can often be found sipping spiced chai or pomegranate green tea in exotic locations, some of which exist in this world.