One of the things that I’m working on in the next while is to bring more authors and unique stories to my author page. There is a world full of very talented and fascinating people out there. My goal is to introduce you to a few. The first is Simone Salmon with a book that looks like a very good read. I have it on my list and it will be reviewed in the not too distant future on Celticfrogreviews.com 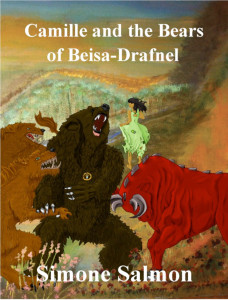 Years of deception and suppressed trauma do not prevent secrets from unraveling when
parallel worlds clash, intertwining families and exposing hidden agendas.  An unwanted romance mirrored in an alternate universe has devastating consequences for an unsuspecting young woman and a mysterious stranger.

“There is a vast literary intellect behind Camille and The Bears of Beisa – Drafnel, and it belongs to author Simone Salmon. The language is transfixing, bewitching, erupting into that realm between an epic poem of breakneck pace, and the clarity and rigor of an after-action report meant only for a general’s eyes.

This story operates in many rich dimensions. It reads like a graphic novel, but without need of illustrations, as the events explode like fireworks in the mind’s eye. What an amazing piece of writing!”

Here’s what the critics are saying about Drafnel:

“The structure and some of the themes of the book reminded me of the movie The Fountain, which I adored. This idea of the same person persisting in different forms across time and space, mostly through the power of deep emotional connection to other people, really connected the two pieces in my mind.”

“Salmon’s use of folktales and specific stories to build out the structure of this unfamiliar world, and to link it back to Camille’s story, was a brilliant narrative device.”

“Drafnel is Dune-like in the grandiose sweep of its worldbuilding. The sci-fi universe Salmon creates, Narvina, with its eight ruling clans and ornate power structures was intriguing. It was also refreshing to read a great space opera like this where the people in charge are people of color, and where the universe is a matriarchy.”

“The writing in this section is very contemporary and accurately reflects the self-confidence of young urban women who feel they’re on the cusp of great things and fully in control of their personal destinies.”

“…a bit of writing that stays with you a long time.”

Aknanka clamps down with all her might. Her teeth tear into Sephia’s wrinkled skin, digging for chunks of flesh. They only grind against bone. A fist smashes into her cheek, jerking her head sideways. Sephia yanks her hand away right before Aknanka chomps down again. Blood gushes everywhere.

“I’m not going anywhere with you!” Aknanka’s scream rages through the interior, punching a small dent into the door. It slams shut.

Any experimenting she needs to conduct today will be done right here. And without blindfolds. The metal restraints chafe Aknanka’s wrists as she wriggles around for freedom.

“Stop fighting, Dreamer. You make this harder than it has to be.”

A med-bot enters the room and stitches the bandages over Sephia’s wound. The pale Elder clenches her fists. Her eyes blaze to match the blood staining the floor. The med-bot’s front panel flashes, absorbing the charge from Sephia’s quelled anger. Sparks bounce across the overloaded circuits. The bot spins over to the sealed porthole and then powers down.

“These gene markers will soon confirm our suspicions, Dreamer.” Sephia’s shoulders stiffen, tugging at the hood to expose her protruding frontal lobe. Her white skull magnifies in the dimness. Her lips never move.

Na-mum Camille warned Aknanka that the Elders would spare no sympathy once they discover her true kinsatah. She followed every painstaking instruction: the implants are undetectable, even from their host. 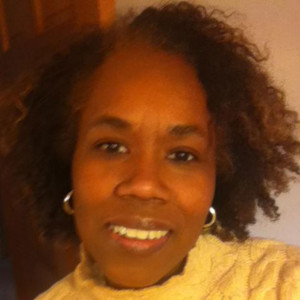 Simone Salmon, a Jamaican born New Yorker, is the mother of two sons and a jack Russell terrier.

Simone is still working on her exit strategy from Corporate America, but in the meantime she writes novels, poetry and expands her multisensory perceptions.

She is a spiritual truth seeker who appreciates psychic phenomena and timelessness.

Music of all kinds, warm weather, lounging on the beach, and experiencing the unknown are just a few of her most favorite things.

The food on display and the brilliant dyes of the hand-loomed textiles hanging at the market made me homesick. The marketplace crowded with vendors selling varied crafts and wares. The frenzied pitch of the hagglers echoed under the tin roofs. Voluptuous women wearing multi-colored wraps balanced huge straw baskets on cornbraided heads, while children darted through stalls with jaws stuffed of toffee candy or juggled melting snow cones with syrup-stained hands. Fruits ripening in the heat sweetened the layer of jerk pork and chicken charring over coals inside huge metal drums.

At first Miss Mattie kept me close, but as the market became more crowded her clenched fingers slackened. I searched the aisles, worried about returning home empty-handed. Failing to find any spices, I started making my way back to Miss Mattie and then noticed a young woman with a basket tucked between her knees. Loose braids stuck out from under her head scarf. Kind hazel eyes invited me forward. Curious, I bent over to check out the samples. The woman pulled me closer and stuffed a piece of cloth into my waistband.

“A gift from the Goling family, Miss. Put it in safe-keeping. This has been my honor.”

Miss Mattie swooped in at my heels in a matter of seconds. She sniffed the air several times and shoved me away from the vendor’s stall. We left thirty minutes later, my impatience to unwrap the cloth’s contents shielded.

Unpacking the supplies, I started dinner. Then, while the meal simmered, I sneaked to my room and pulled out the puffed packet. Wrapped inside were five cinnamon sticks. My smile must have been a mile wide. I decided to add them to my hideaway after Miss Mattie left for church that Sunday.

As my guardian angel instructed, I wrapped a small piece under the ribbon tied around my braid. I noticed Miss Mattie’s immediate reaction. Her harsh tone gentled and she even allowed me to eat with her at the dining table. A welcomed change, my nerves were still on guard, unsure of how long Miss Mattie’s tolerance would last. Against my better judgment, I decided to ask about Caleb and Cassandra.

“Miss Mattie, do you think I can visit with my sister and brother sometime soon?”

Growling, Miss Mattie cocked her head and then swung around to face the door. Her eyes rolled back into their sockets. Her head snapped back as she sniffed the air.

“Why are you sitting at this table?”

I warned you, Grandmother. Leave the table now!

Miss Mattie’s neck protruded as her limbs extended. Fingers mutated into claws and hind legs ripped through her lower extremities. Wiry tufts of hair sprouted all over her body. Her face contorted and elongated as saliva slimed down enlarged jowls. My hand stifled the scream roaring through my head.

Get up and walk away slowly. Do not turn your back on it. Now!